Skip to content
RevenueBOT.io > Blog > Cryptocurrency news > Web 3.0: The Future of the Internet 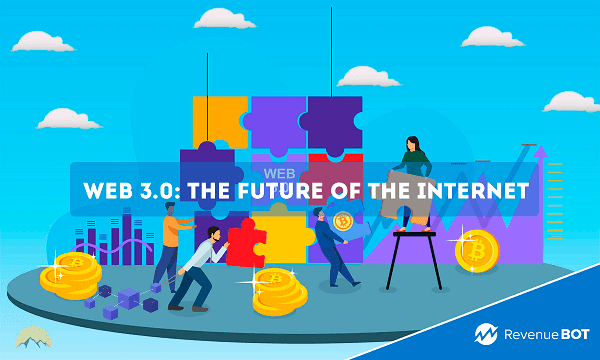 The internet has evolved immeasurably from those early days, and it now has more than 5 billion regular users, roughly 63% of the world’s population.

Some people believe that a new paradigm for the internet is coming, called Web 3.0—also often dubbedWeb3. They claim that a next-generation set of technologies could disrupt society just like Web 1.0 did in the 1990s.

Despite these lofty claims, the concept of Web 3.0 can be both confusing and elusive. Let’s take a closer look at the claims and criticisms of Web 3.0 to understand better what it’s all about, and also break down Web 1.0 and Web 2.0.

The first version of the internet is sometimes called the “static web.” It was made of read-only webpages that, by and large, lacked much in the way of interactive features.

Web 1.0 offered little beyond browsing static pages. Content generation was handled by a select few, and information was hard to find. The main purpose of Web 1.0 is searching for information. Significantly, web users could not interact freely because it was “read-only,” so any discussion was done offline.

Furthermore, because there were no search engines available during this iteration, navigating the World Wide Web (WWW) was not nearly as simple as it is now. You needed to know the website address (URL) for any site you wanted to visit. As one tech writer recalls, to “browse” the Internet back in the day, “we had to go through FTP file directories screen by screen and hope that the file we wanted was in there somewhere.”

However, by the mid-1990s, Netscape Navigator emerged as the first (or at least first successful) web browser, and pioneered several browser features we still use today:

Alas, Netscape was annihilated by Microsoft during what was known as the browser wars.

In October 2004, O’Reilly Media and MediaLive hosted the first Web 2.0 conference to highlight a host of new software applications built on the web.

In late 2005, YouTube was launched. The video-sharing site was a big part of the Web 2.0 revolution, which marked the internet’s departure to an era of dynamic content. Users could now interact with web pages, communicate with each other and create content.

For many, the greatest symbol of this era is the emergence of social media networks. Smartphones soon followed, with the first iPhone released in 2007.

Before long, we were all creating, sharing and commenting on content instantaneously from the palms of our hands. If Web 1.0 was the read-only iteration, Web 2.0 could be seen as the read/write upgrade, or what we know as the internet today.

Darcy Dinucci first coined the term Web 2.0 back in 1999 in her paper called “The Fragmented Future”. The emergence of web 2.0 was driven mainly by three core layers of innovation:

Think of it as the “read/write/own” upgrade to the internet.

Because it remains a collection of ideas more than anything else, it’s challenging to nail down a precise definition of Web 3.0. For cryptocurrency developers and enthusiasts, Web 3.0 incorporates the technologies and concepts that are at the heart of crypto: decentralization, token-based economies and blockchain.

This vision of Web3 tends to be a more democratic version of today’s online world. It’s centered around the idea of ownership, removing control from the dominant big data companies and other central authorities and handing it to the masses. This is what’s meant by decentralization.

Decentralization means internet users can transact business peer-to-peer, cutting out intermediaries and removing power from controlling entities. There is a greater focus on user privacy, transparency and ownership.

Here’s where blockchain technology and cryptocurrency come into the equation. Cryptocurrencies and the token economy facilitate this model of decentralization, allowing for information to be stored on a distributed ledger outside the remit of any controlling entity. Web 3.0-based technologies and projects

There are many different paths that the future development of Web 3.0 could take. Here are a few of the Web3 technologiesand projects we’re starting to see deployed today:

One of the most intriguing sectors is DeFi, which is short for decentralized finance.

DeFi aims to revolutionize the financial sector, removing the need for central authorities such as banks, payment processors and other intermediaries. In their place would be a peer-to-peer financial system that lives on the blockchain.

As with most Web3 applications, there would also be enhanced transparency, given all loan amounts, collateral and other data are available for anyone to see on publicly accessible blockchains.

Importantly for certain jurisdictions, accessibility is also enhanced. DeFi would be accessible to anyone with an internet connection, without the need for paperwork or a third-party verification.

Most of what banks and other financial intermediaries offer can be achieved through DeFi, argue its proponents. This includes bank deposits, lending and borrowing, asset trading and insurance, among others.

A few examples of popular DeFi protocols include Uniswap (UNI), Aave (AAVE) and Chainlink (LINK), which are designed to carry out financial transactions.

Non-fungible tokens (NFTs) are a class of digital assets that live on the blockchain.

Each NFT is unique (non-fungible).  This is in contrast to, say, dollars, which are fungible—one dollar is exactly the same as any other dollar.

Advocates see a wide variety of potential use cases for NFTs, but to date the only widespread use has been for digital artworks. As the crypto market accelerated moonwards in 2021, multimillion-dollar sales of digital art NFTs were commonplace.

But as crypto winter set in in 2020, the NFT market crashed. Professional investors and art world critics derided NFTs as little more than a speculative bubble.

Crypto world has not given up on NFTs, and Web3 proponents see them as useful for verifying intellectual property, authenticating documents and various crypto gaming features.

Many types of traded cryptocurrencies support NFTs on their blockchains. A few examples include Ethereum (ETH), Solana (SOL) and Avalanche (AVAX), to name a few.

If you want to start trading crypto on exchanges, try out the trading bot. Thanks to it, you will enjoy your time while the bot trades for you.

Decentralized autonomous organizations (DAOs) may sound complicated, but the underlying concept is simple. A DAO is a group formed for a common purpose, with its rules, plans and objectives all encoded on the blockchain.

DAOs are controlled by their members. Proponents claim that a DAO has no hierarchy, no bureaucracy and no red tape. Most commonly they operate based on a democratic structure, where votes are cast in connection to how many crypto tokens users hold.

“What makes a DAO attractive to many users is that all financial transactions are recorded on a blockchain, which eliminates any third-party involvement,” says Felice Gorordo, CEO of eMerge Americas.

“Instead, the transactions go through uneditable, transparent smart contracts. Breaking away from the traditional vertical company structure of executives, board of directors, and investors, a DAO allows all members to be involved and vote if any changes need to be made,” Gorordo says.

The idea behind Web 3.0 is to make searches on the Internet much faster, easier, and more efficient to process even complex search sentences in no time.

Web 3.0 has neither centralized databases that store the application state nor a centralized web server where the backend logic resides. Instead, there is a blockchain to build apps on a decentralized state machine and maintained by anonymous nodes on the web.

The logic of your applications is defined in smart contracts, written by the developers, which are deployed onto the decentralized state machine:

Anyone willing to build a blockchain application deploys their code on this shared state machine. The front end remains almost the same as in Web 2.0.

These features bring us closer to the definition of Web 3.0. With the addition of semantics and machine learning, Web 3.0 is all about the evolution whereby computers make sense of information. They find out what you’re interested in, help you find what you need more quickly, as well as understand the relationship between things.

You can easily ask your automotive helper a question while driving with Web 3.0 (“I’d like to watch a romantic movie and eat Japanese food”). The car assistant’s built-in search engine gives you a customized response based on your location, suggesting the closest theater that matches your request and a good Japanese restaurant. It does so by automatically examining social media reviews. The restaurant’s 3D menu may then be displayed in the display.

Web 3.0 is no longer a dream, but a new reality (at least in many cases). In fact, it is cognitive technologies such as Expert.ai that make all this possible. Understanding language is integral to many aspects of the Web. If you make semantics and natural language processing as central components, the possibilities would be endless.

Futurists say that Web 3.0 will become an essential part of the ever-expanding evolution of the internet. If this vision comes to pass, it could unlock speculative potential for investors and developers.

If you believe in the vision of the future, buying cryptocurrency is an easy way to gain exposure to Web3. You can purchase cryptocurrencies that support DAOs and DeFi protocols or buy digital art in the form of NFTs.

This can be easily done on crypto exchanges. However, barely anyone has sufficient knowledge and skills for trading and investing, which is why a trading bot can come in handy. It runs on a pre-made strategy while bringing passive profits to the trader.

Just remember, Web 3.0 is in its nascent stage. Investments of this nature are highly speculative and should be discussed with a financial advisor.