Nowadays hardly anyone is unaware of cryptocurrencies. Little was known about Bitcoin when it came out, but today, people talk about it on TV, in the media, all over social networks. Bitcoin is the world’s largest crypto by market cap. Most probably you have a friend who dealt with Bitcoin mining or trading on crypto exchanges.

Numerous prosperous traders, who have been spending a lifetime in stock trading are progressively shifting to the crypto industry. However, there are many who still have no idea what Bitcoin is, where it came from, or the purposeof it. Crypto enthusiasts believe that digital assets are the next-generation payment systems, which are expected to completely replace traditional cash assets. In contrast, head-scratchers see everything in crypto as a big bubble that will soon burst. Nevertheless, major international companies keep investing in crypto. So what exactly is cryptocurrency? We will also explain below why Bitcoin is the number one among digital assets.

What a Bitcoin is

Before you figure out what bitcoin actually is, you first need to get to grips with the concept of cryptocurrency. 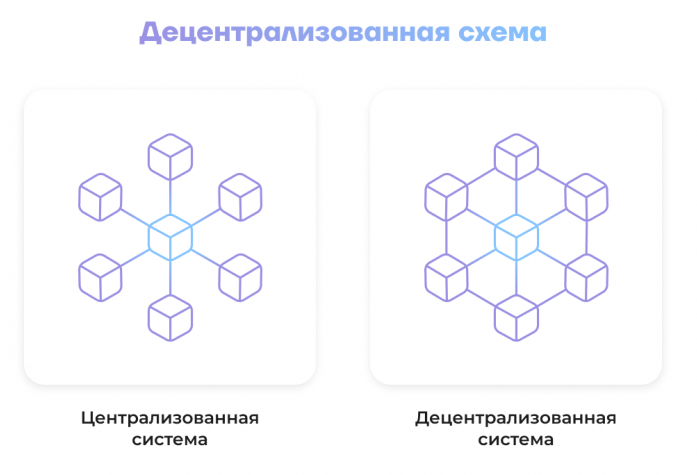 It lacks some kind of payment element or agency that could regulate its circulation. Crypto is not owned by any state. It is not backed by fiat (traditional) funds or any kind of commodities. Likewise, there is no cryptocurrency expressed in physical terms, either in the form of coins or banknotes. It is basically a set of mathematical equations that are solved by computers.

A blockchain technology is the backbone of cryptocurrencies. Cryptocurrency may appear in three forms: Bitcoin, altcoin and token.

Now that we understand what cryptocurrencies stand for, we move on to the background of their leader, a Bitcoin.

Bitcoin is the world’s pioneering decentralized cryptocurrency and payment system, introduced back in 2009. So far, there is no reliable information about who exactly invented Bitcoin and who is behind its creation, though it is believed that the originator of BTC is a person or a group of people named Satoshi Nakamoto.

To put it bluntly, Bitcoin is the world’s very first decentralized digital asset and is the leader among all the cryptocurrencies.

By the word “cryptocurrency,” we mean a group of digital assets, with secure transactions that are verified using cryptography, which is the scientific practice of encoding and decoding data. Transaction data is stored on computers around the world using a distributed ledger technology (DLT) called blockchain.

Bitcoin has a distinguishing feature – it is possible to divide it into smaller parts, up to eight decimal places. Such parts are commonly referred to as “satoshi”, and are used for payments. You have to keep this in mind because the price of a single Bitcoin has soared from less than a cent to tens of thousands of dollars since its inception. Once Bitcoin is seen as a marketable asset, it is denoted by the stock ticker symbol – known as BTC.

When discussing crypto, the term “decentralized” is frequently used. In the case of bitcoin and many altcoins, this means that the technology and infrastructure controlling creation, supply, and security are independent of centralized entities such as banks or the government.

Instead, BTC is designed so that users can transfer it to each other directly, through a peer-to-peer (P2P) network. It is a network where all users are treated equally and can work without a central server or intermediary company. It allows you to send and receive payments in Bitcoin seamlessly between the parties.

The Bitcoin network is a public one. It turns out that every person on earth who has access to the Internet is able to connect to it. Bitcoin is also open-source.

Perhaps the easiest way to conceptualize Bitcoin is to think of it as money for the Internet. The Internet is digital, no one owns or controls it, it has no limits, goes 24/7, with people sharing data effortlessly among themselves. At this point, imagine if there was so-called “Internet currency” available, something that everyone who uses the Internet would be able to help secure it, release it, and make payments to each other directly, with no bank involved. In fact, this is what Bitcoin is.

Blockchain technology is designed to verify, store and organize cryptocurrency transactions in an immutable, transparent way. Immutability and transparency are absolutely essential for a payment system.

With each new transaction confirmed and added to the blockchain, the network is updated to display the latest changes. What comes to mind is an open Google Docs document, automatically updated when anyone who has access to it edits its contents. 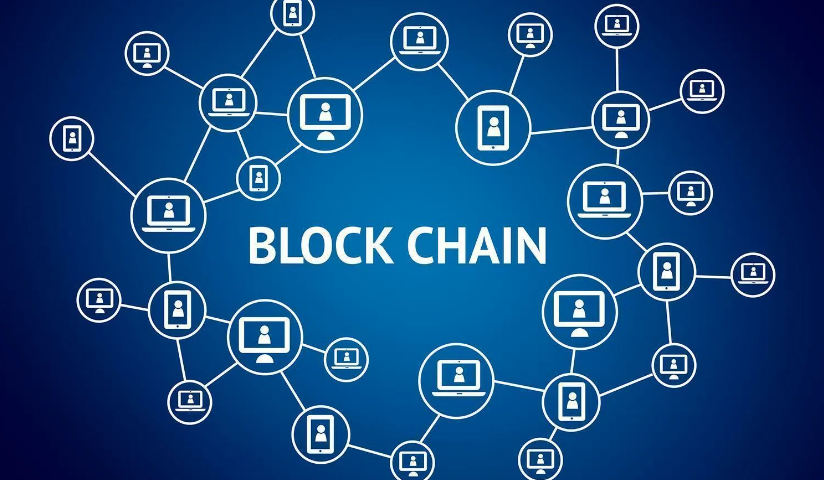 As the name implies, the Bitcoin blockchain is a digital string of chronologically arranged “blocks” – fragments of code containing data about bitcoin transactions. Note that transaction confirmation and bitcoin mining are completely distinct processes. Mining takes place regardless of whether transactions are added to the blockchain or not. Similarly, increasing the number of transactions in bitcoin in no way increases the rate at which miners find new blocks.

No matter how many transactions are pending confirmation, Bitcoin is programmed so that new blocks are added to the blockchain about once every 10 minutes.

It is known that in 2009, when Bitcoin first appeared, you could buy 1,309 BTC for just one dollar, according to New Liberty Standard, an online service. By the end of the year the exchange rate climbed to 650 BTC per $1. It turns out that when it first started, a single bitcoin was worth less than a cent. At that moment, early miners who started mining Bitcoin directly on PCs could receive a munificent reward of 50 BTC as a result of successfully accomplished tasks (or writing another block in the blockchain). However, the reward is halved every four years.

Thus, if you start mining today, it will require a lot of computing power to do it and you will earn 6.25 BTC for accomplishing the task.

ATH (All Time High) is another meaningful term on the crypto market. It shows the record peak of a particular coin, over the entire time frame.

ATH is needed to analyze the long-term outlook of the coin in the years to come. If you want to see the historical data of the cryptocurrency, just go to its chart and put an “all time” checkmark. Here we use the CoinMarketCap website and take BTC for our example. 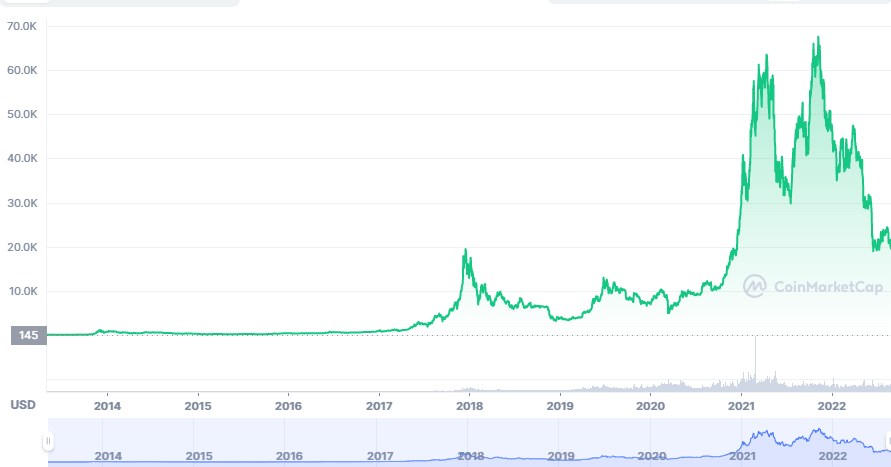 As the graph illustrates, the peak point reached by the coin’s price was approximately $68,000. That means Bitcoin’s ATH for now is $68,000.

What doesthe exchange rate of BTC depend on? Unlike traditional money, the BTC exchange rate depends primarily on supply and demand on the market. The volatility of the coin is also affected by world events such as changes in U.S. Federal Reserve rates or the coronavirus pandemic. This is why Bitcoin can go up as well as down in value.

More than 19 million bitcoins have been in circulation to date, according to CoinGecko.

Despite Proof-of-Work being the first and generally the most common type of consensus mechanism for blockchain-based cryptocurrencies, many others exist – notably Proof-of-Stake (PoS), which tends to consume less overall computing power (hence, less energy as well).

How new bitcoins are released

Bitcoin mining requires a variety of hardware and software. It was possible to mine Bitcoin on a PC when it first appeared. As the network grew in popularity, more and more miners joined, however, thus reducing the chances that they would be the ones to decrypt the hash. As long as your personal computer is equipped with newer hardware, you can still use it as a miner, but the chances of decrypting the hash individually are negligible.

To be successful as a bitcoin miner, you have several options. It is also possible to use your PC to run bitcoin-compatible mining software and join a mining pool. Mining pools can be defined as groups of miners who combine their computing power to challenge the larger mining farms. 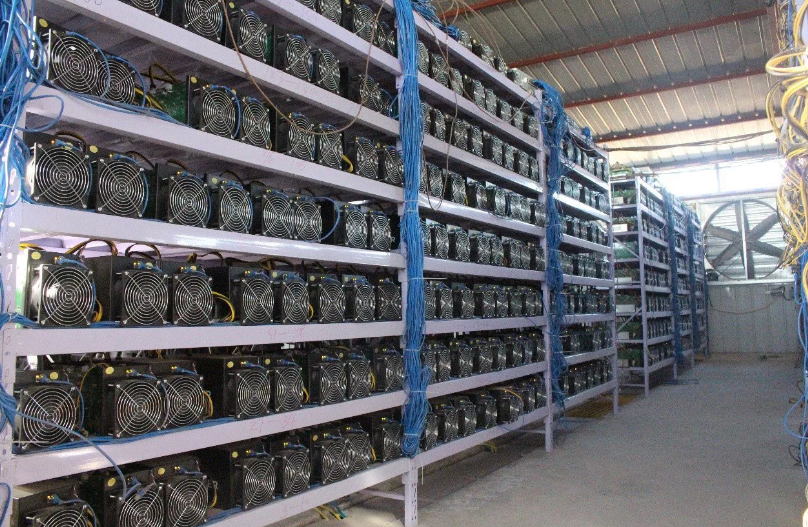 If you are financially capable, you also may purchase an ASIC miner. Usually a fresh one can be found for around $20,000, but miners sell second-hand ones as well. When purchasing one or more ASICs, there are some substantial costs to consider, such as power supply and cooling.

You can choose from several mining software and plenty of pools. The two most famous software programs are CGMiner and BFGMiner. It is important when choosing a pool to find out how they pay rewards, what the possible fees may be charged, as well as to read some reviews about the mining pools.

Within the bitcoin network, a coin distribution strategy known as ‘bitcoin halving’ is used to ensure that the number of bitcoins allocated to miners diminishes over time. As the number of new bitcoins in circulation gradually decreases, it helps uphold the asset price (based on supply and demand basics).

As of today, there are more than 18.7 million BTC in circulation. Taking into account the method of halving and other aspects of the network, such as the mining difficulty, it is assumed that the last bitcoin will be mined around the 2140s.

In case you are not a miner and do not want to spend a lot of money on mining farms, then use cryptocurrency exchanges. Every major marketplace has Bitcoin available for purchase and storage in the crypto wallet, expecting it to grow in the long term.

Moreover, one can engage in trading, buying BTC at a low price and selling it at a high one. But here you need some understanding of the market, to know how an asset behaves in any given situation. It will therefore be useful to have a bot designed for trading on crypto exchanges, which will do the work for you. These bots run using a ready-made strategy and have the potential to generate passive income for someone who is not familiar with the crypto market.

It is essential to have a cryptocurrency wallet in order to make use of bitcoin. The wallets hold the private keys to the bitcoins you own, which you must enter when making a transaction. Bitcoin is accepted as a means of payment for goods and services in many merchants, retailers, and even stores.

It is common for businesses that accept cryptocurrencies to hang a sign that says “Bitcoin is accepted here,” so you can make transactions using the appropriate Bitcoin ATM (Automated Teller Machine) or wallet address via QR codes and smartphone apps. Online businesses readily accept Bitcoin, adding this payment method to a number of other online payment options: credit cards, PayPal, etc.

Looking at the immediate prospects of the first-ever cryptocurrency is somewhat complicated, but a number of experts in the field of cryptocurrencies still dared to do so.

Chen Limin, CFO and Head of Trading Operations at ICB Fund, reckons that Bitcoin will sink further under the pressure of U.S. regulators who will hike the key rate. How long this will last is still unknown. Thereafter, however, it will begin its long-awaited ascendancy onwards and upwards. What is likely to happen is that the BTC will drop to $17.7K or to $15K, followed by a rally. Lead analyst at 8848 Invest agreed with him.

Anyway, as we can see from experience, when bitcoin gets cheaper, it is followed by a rise and a penetration of new all-time highs.

Bitcoin is the progenitor of all cryptocurrencies. As the first-ever cryptocurrency by market capitalization, it is also known as digital gold. Large companies, such as MicroStrategy, are heavily investing in it. As digital assets enter more and more tightly into our lives, it is only a matter of time before crypto can be used in everyday life, as a means of payment for all goods and services. You should therefore consider your priorities ahead and look into how you can earn bitcoin today. One of the most straightforward solutions would be to engage in trading, where a trading bot would come in handy.