Skip to content
RevenueBOT.io > Blog > Cryptocurrency news > DAO: what it is and how it works 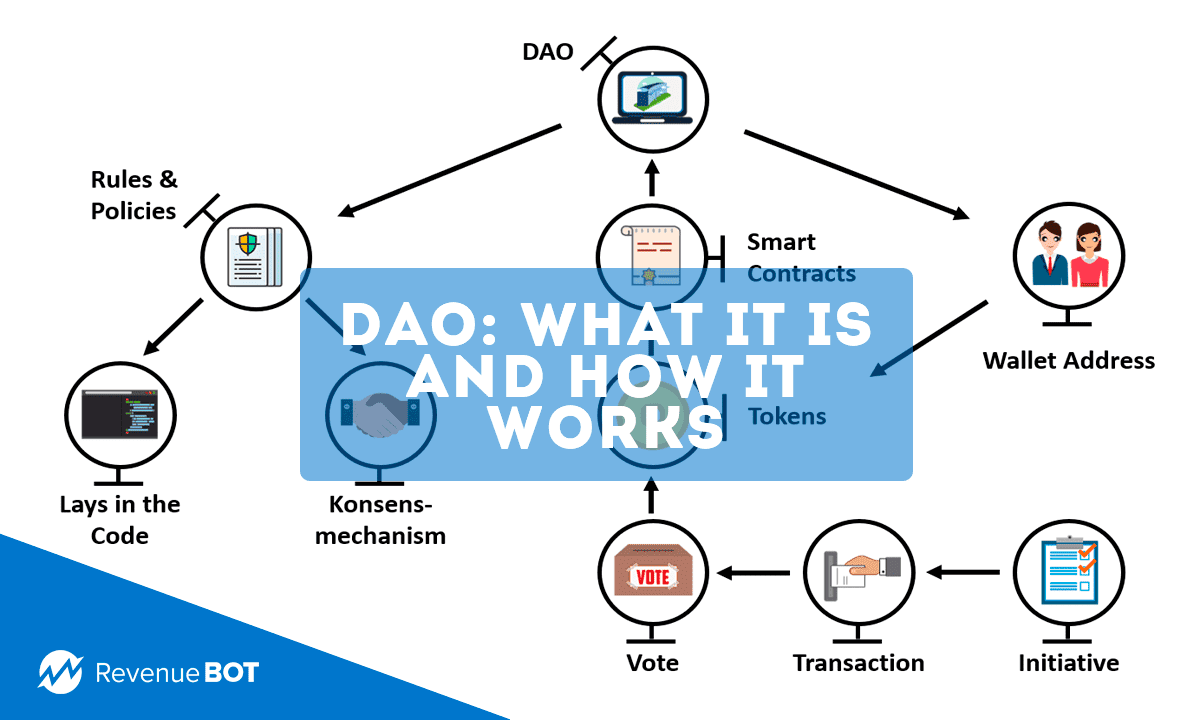 The decentralized autonomous organization (DAO) is a new form of legal framework. In the absence of a central governing body, each DAO member usually has a common goal and tries to act in the entity’s best interests. DAOs are used to make choices in a bottoms-up management style and have gained popularity among bitcoin enthusiasts and blockchain technology.

What DAOs exactly are

One of the key features of digital currencies is their decentralized nature. This means that they are not controlled by a single institution, such as the government or the central bank, but rather distributed among multiple computers, networks and nodes. This decentralized status is used often by virtual currencies to achieve levels of both confidentiality and security that are not normally offered by traditional currencies and transactions.

Inspired by the decentralization of cryptocurrencies, a group of developers came up with the idea for a decentralized autonomous organization, or DAO, in 2016.

The concept of a DAO is to promote oversight and management of an entity similar to a corporation. However, the key to a DAO is the lack of central authority; the collective group of leaders and participants act as the governing body.

DAOs rely heavily on smart contracts.  These logically coded agreements dictate decision-making based on underlying activity on a blockchain. For example, based on the outcome of a decision, certain code may be implemented to increase the circulating supply, burn of a select amount of reserve tokens, or issue select rewards to existing tokenholders.

The voting process for DAOs is posted on a blockchain.  Users must often select between mutually-exclusive options. Voting power is often distributed across users based on the number of tokens they hold. For example, one user that owns 100 tokens of the DAO will have twice the weight of voting power over a user that owns 50 tokens.

The theory behind this practice is users who are more monetarily invested in theDAO are incentivized to act in good faith. Imagine a user who owns 25% overall voting power. This user can participate in bad acts; however, by doing so, the user will jeopardize the value of their 25% holding.

DAOs often have treasuries that house tokens that can be issued in exchange for fiat. Members of the DAO can vote on how to use those funds; for example, some DAOs with the intention of acquiring rare NFTs can vote on whether to relinquish treasury funds in exchange for assets.

There are several reasons why an entity or collective group of individuals may want to pursue a DAO structure. Some of the benefits of this form of management include:

Not everything is perfect regarding DAOs, though. There are severe consequences to improperly setting up or maintaining a DAO. Here are some limitations to the DAO structure.

Lots of DAOs have their native tokens, many of which you’ve probably heard of. Here is a list of top 10 DAO crypto projects, found on most marketplaces.

In case you have trouble getting started trading these tokens on exchanges, or you just do not have enough time and experience, you can seek help from our crypto trading bot. Using it, you can engage in passive trading while profiting from DAO tokens.

DAO is now a trend for 2022. The field is booming and is drawing a lot of attention. Last March, the state of Wyoming released a bill that made it possible to register a DAO and obtain the same rights as an LLC. So the DAO’s outlook is extremely positive.

In addition, there are a variety of DAO platforms for learning and earning. An outstanding example would be the Rabbithole project.

If you are looking to gain DAO tokens right now, feel free to do so by using our crypto trading bot. It will serve as your indispensable assistant, running according to a predetermined strategy and generating passive profits.