Skip to content
RevenueBOT.io > Blog > Cryptocurrency news > FUD and FOMO – what is it? 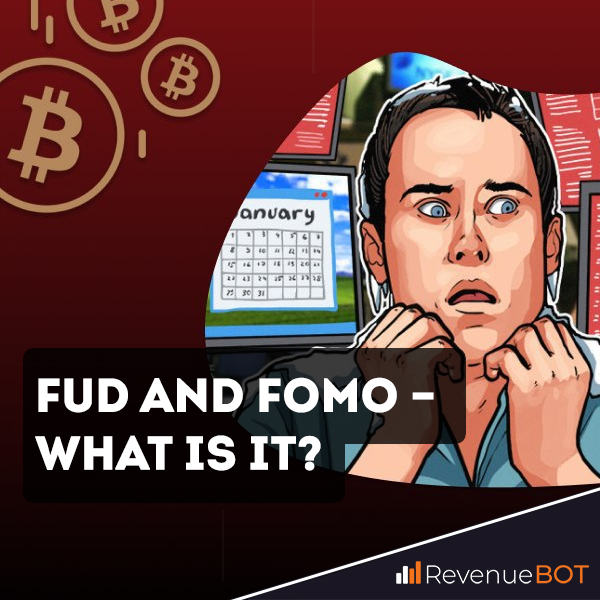 The financial market is driven by people who are responsible for the processes within it. All trafficking is carried out exclusively by people. Of course, there are various programs, robots, bots for trade (such as RevenueBot), but they are all run again by people. Trading is not for the faint of heart, but requires strong emotional resilience to avoid unnecessary losses. However, not every market participant can boast of this quality. This is especially the case with newcomers to the market: they make transactions by at the call of the heart, with the help of a sixth sense, the sign from above prophesied and so on. Emotions are a big obstacle to trade and it has a name – FUD and FOMO. What these terms are and how to understand what you fall into their category – let us discuss in this article.

FUD or Fear, Uncertainty and Doubt. As we have already learned, emotions are bad for trade, and that is the psychology that allows certain individuals to influence market participants, with deliberate intent to harm them. The main purpose of FUD is to spread the right false information that will lead to panic. Investors start selling or buying an asset in crowds, although it is not really clear why they do so. In fact, it’s all the fault of FUD, which has achieved its goal. As an example from real life, we can take the beginning of 2020 and the pre-quarantine period. There was a lot of online trash about stores running out of groceries.

So let’s take a look at an example of how it works in the financial markets. March 2020 crash. The World Health Organization has officially declared Coronavirus to be a pandemic. This meant closing communications between countries, shutting down various sectors of the economy, and increasing unemployment worldwide. However, there was no clear reason for the collapse, but it did not prevent it. The overall debacle in all financial markets ranged from 40% to 70%. What happened was that private investors, seeing a bear trend on the chart, decided that it was time to drop assets. After that, when the drawdown became more noticeable, they were joined by larger investors who did not want to incur losses. In the end, thanks to a fairly simple scheme, the world’s financial markets collapsed in 24 hours. The above action has a definition – deleveraging or a sales spiral. It works like this:

There’s an event in the market that’s encouraging a major investor to divest. Since investors are large, the asset is large, which means its sale will not be invisible to other market participants. The price starts to go down and smaller investors see it. They pick up the wave, and they start selling. Next begins a series of liquidations of those market participants who do not have a strong reserve of deposit and collateral in position is lacking. After that, they sell to those who want to keep some profit. Then a bigger wave of liquidations from the big players. You get a chain reaction, or you get a sales spiral where everyone starts selling because someone started selling before them. This event could bring down the price of an asset in a matter of hours.

In order to avoid FUD on you, I advise you to double-check all incoming information. So historically, there is a lot of unreliable information and people online who want to make money off of you. Someone might just benefit from what you’re about to sell or buy. Roughly speaking, if you «super trader» said that shares of Apple need to be cut, because they are on the brink of bankruptcy, then you should first get acquainted with the financial statements of the company and then take any actions.

FOMO or fear of missing out it is – panic trade. That’s exactly what I was talking about at the beginning of the article. Inexperienced market participants do not rely on fundamental or technical analysis, on the news background, on the opinion of other, more experienced traders. They rely on their inner instincts, which they believe will help them make a fortune. As a rule, these people are very afraid to miss the opportunity to profit, so they buy or sell just when they don’t have to.

Back to our crypto market, at the end of 2017. Bitcoin has updated its maximum price of $20,000. That’s when the FOMO people bought the main cryptocurrency. Do you know when they sold it? That’s right, during the crypto winter, when the entire market was in a drawdown and bitcoin was worth $3,000-$4,000. Can you imagine what happened to them in 2021, when Bitcoin set a new maximum of $58,000? Why they do it, no one can explain it, but personally my opinion – they enjoy it aesthetically, for I see no other reason. Of course, after their brilliant trade ideas, these people begin to talk about how cryptocurrency is a hoax, a pyramid, and so on. They tend to favour impulse market movements over careful price forecasting.

But the FOMO phenomenon itself is not as bad as its consequences, and I am not talking about damages. If the trader has long acted on the principle described above, it is dull logical thinking. It is likely that the deals he opened and closed with his heart made him a profit. At some point, he will decide that this particular style of trade is optimal, and that is where the main mistake will be. Constantly opening deals for luck – dubious, sooner or later the market will take away the entire deposit from such a trader.

In order not to become one of the FOMO adherents, the following rules must be followed:

Usually if you have a good trading strategy, FUD and FOMO will not be scary for you. Both terms are emotional, but if you understand what’s happening in the marketplace, you won’t be afraid of emotion. Learn to recognize patterns and shapes on the chart – this will help you to determine when a panic sale starts in the market and what to do in such a situation. The chart contains a lot of information that needs to be correctly interpreted and then market excitement will be your niche. There is an interesting point: FUD and FOMO arise from incompetence in financial markets. Look at the really successful hedge fund traders – these are the smartest people who have multiple diplomas, as well as the most consistent self-development. The threshold for entering financial markets is very high, but you can overcome it. It’s constant market research that will help you become less emotionally dependent. The rest will come with experience.