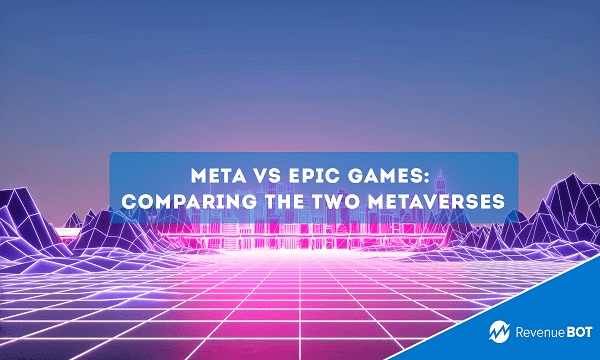 Among the companies that develop metaverses, two stand out – Meta and Epic Games. They both set the goal of creating a virtual world with the integration of their own products, where there will be their own economic system. Read on to find out what pilot projects both companies are using to implement their ideas and what kind of user experience they will offer in the future.

Zuckerberg’s renowned company redefines the concept and shifts from dealing with social media to creating the Internet of the future. You will be able to live in the metaverse almost like in the real world: you can buy clothes, go to work, hang out with friends, etc.

A great number of technological resources will support the operation of the Metaverse.

These are special gadgets, applications and software. Let us talk about them in more detail.

Oculus Quest 2 is a VR headset with which users will be able to step into the metaverse.

It is used in most of the company’s products, ranging from Horizon Worlds game to the FitXR fitness app. Screen resolution is 4K, 2K for each eye. The headset has a built-in Qualcomm Snapdragon XR2 processor with 6 GB of RAM. There are two hand-held controllers Touch bundled with the device.

This VR headset is a successful VR gadget created by Meta. One of the main advantages that distinguish it from its competitors is its self-containment. You do not need to plug it into a computer or smartphone, all the necessary things are built into the device.

At the moment, Meta is teaming up with RayBan to create a headset that will be no larger than ordinary glasses. They want this technology for the convenience of users.

Project Cambria is the new headset by Meta for virtual and augmented reality. The company revealed the product development at an October 2021 presentation, and described it as a “high-tech” and “high-end” device. However, Project Cambria will not be a successor to the Oculus Quest line, but will be a separate gadget.

The main feature of the headset will be face tracking. This means that it can be controlled by facial expressions and body movements. Moreover, the gadget will show color passthrough, allowing users to see virtual and real images at the same time. The technology will make it possible to integrate the physical world into Project Cambria applications.

Epic Games metaverse is the opposite of what Meta wants to create. The company has no gadgets and not as many apps and platforms, unlike Zuckerberg’s company. They also differ at the conceptual level. As Tim Sweeney, CEO of Epic Games, speaks about the metaverse, he hardly mentions work on the project and focuses on the entertaining part of it. Below we will cover the company’s products, which will help to create a metaverse.

This game was originally created based on the Battle Royale concept, where players fought each other and the last man standing was the winner. It rapidly gained popularity, which prompted the developers to ponder on further updates.

This took Fortnite away from the Battle Royale strategy to social interactions. You can now build your own worlds and hold various events there. So far, Fortnite has hosted three major concerts by artists like Travis Scott and Ariana Grande, as well as the Tomorrowland EDM fest.

With this tool you can create photorealistic digital humans. Absolutely everything can be customized, from the shape of your eyes to your teeth. No 3D modeling skills are needed to use the tool. For example, to change the nose or cheeks size, just mouse over it and pull it in the desired direction.

Meta’s metaverse puts a person in a virtual space. Thanks to the VR and AR devices in the Horizon Worlds app, all of this is possible. At some point in the future, the company will open up access to sports and gaming activities.

Spending your leisure time outside of work is what the Epic Games metaverse provides. This is implemented in Fortnite, a game with versatile functionality and a focus on social interaction. Such flexibility and adaptability to changes are possible due to the capabilities of the Unreal Engine.

Although the metaverses have different visions, they are still among the leaders in the segment.

But in order to start earning cryptocurrency today, we suggest using RevenueBOT, a platform for creating trading bots. You can use RevenueBOT to create a stable passive income. The platform allows you to create trading bots on the largest and top cryptocurrency exchanges such as: Binance, Bittrex, FTX, OKX and others. The creation of the bot is completely free, the commission fee will be charged by the platform only after the first profit has been made. It should be noted right away that the bot does not have access to the user’s funds on the exchange, and that it trades using API-keys, which means that the exchange account will remain inaccessible. RevenueBot has over 40,000 customers, who make money thanks to our trading bots.

The following is, however, not an exhaustive list of the advantages offered by our platform:

As you can see, the platform has quite a lot of advantages to offer, all you have to do is start trading. There is no need to list them all when you can check everything yourself through RevenueBot’s official website. Have a good trade!