Skip to content
RevenueBOT.io > Blog > Cryptocurrency news > ATOM/BUSD – What about this Pairs trade? 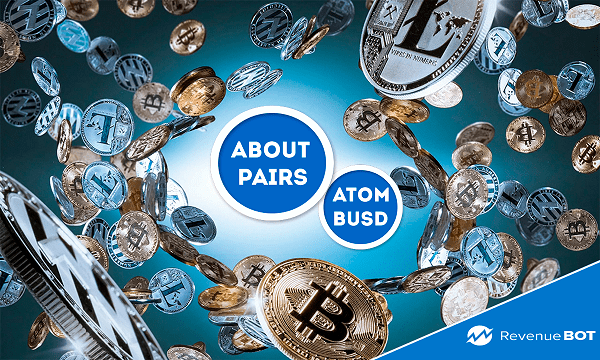 “What about this Pairs trade ?” – is a new format of introductory articles created by RevenueBot. Every week we will be providing you with updates on a new trading pair that has reached the top, according to the transactions completed through the service. In addition to providing information about the token, we will also check the trading pair in a bot simulation and see how much of a profit the trader could have made on it, over a period covering the past 60 days.

Cosmos is a decentralized ecosystem that consists of a large number of independent blockchains, based on the Byzantine fault tolerance protocol. The main goal of the Cosmos network is to allow different blockchains to interact with each other, thereby forming an “Internet of blockchains”. The network also uses hubs that represent the Cosmos blockchain and act as a single point. Such blockchains are called “zones,” which are built using the Tendermint Core protocol. With the Cosmos Hub base chain, digital assets move quickly and securely between zones. Thousands of blockchains can connect to it, communicating with each other through a hub.

ATOM is a native platform token that is used to control the entire Cosmos network. The coin also plays a key role in the Tendermint Core protocol and token holders can participate in blockchain staking and validation. At the same time, ATOM holders are given the opportunity to vote on proposals affecting the development of the Cosmos network. The ecosystem offers users a number of unique features and can make cryptocurrency exchanges faster and cheaper. The native token is also a popular stacking coin and is used to pay transaction fees.

From its launch in 2019, the cryptocurrency Cosmos (ATOM) was trading at $7, but then the rate slowly began to fall, reaching a low point of $1 in March 2020. After that, the coin’s value started to rise and it is currently worth $28. This cryptocurrency is ranked at 20 by market capitalization and this altcoin can be considered an excellent tool for trading on short positions.

Assuming that the bot traded on the ATOM/BUSD pair from December 1, 2021 to February 1, 2022, with the LONG algorithm, we get the following results:

So, as you can see, the platform’s advantages are quite numerous, all you need to do is start trading. And why list all the pros when you can check everything yourself on the official RevenueBot website.